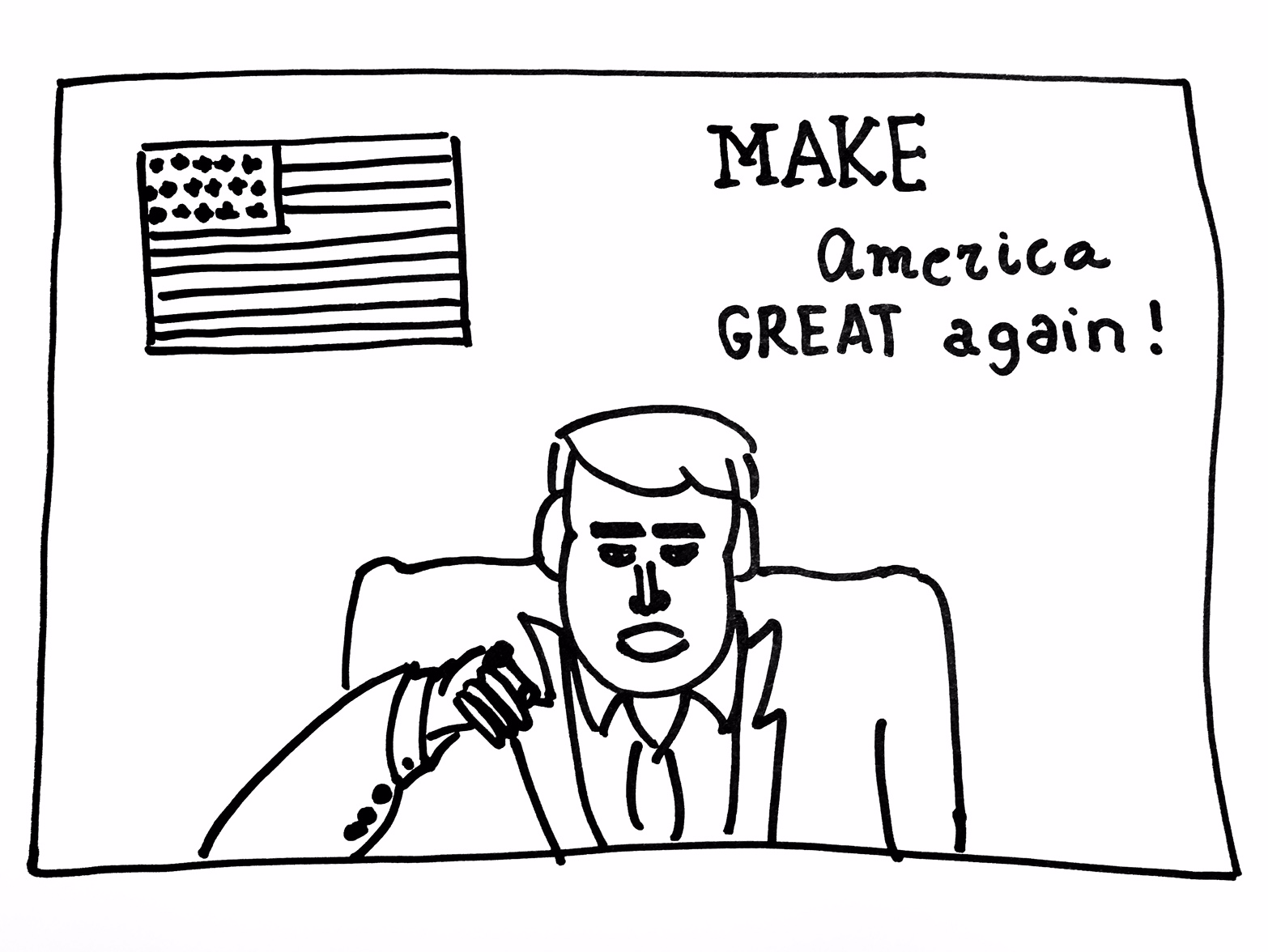 The lessons of history
But please say we were not warned for the possible pitfalls of democracy. In fact, in his famous book ‘the republic’ Plato had already argued that a democracy is the second worst way of ruling a country. Only a tyranny –say, a dictatorship-  is worse, en most likely to be the result of a democracy. He pointed out that it is impossible to rule a country based on the desire of all, and it would in the end lead to ‘the crowd’ ruling. A scary concept, according to Plato. The French revolution is a perfect example of this, in which the guillotine was widely used in the name of ‘the people’. And this crowd is easily deceived by a populist, who uses clever language to grab power on their behalf. Adolf Hitler, a democratically elected leader, could turn Germany into a dictatorship using emergency laws, and do the things he did. While Plato would not have been surprised by this, the world is still in shock today when such things keep happening in any other country.

There is a thing we can learn from history: desperate times lead to desperate voting. Desperate voting leads to desperate leadership. There is a causal relation between bad economic tidings, the threat of war, or a refugee crisis on the one hand, and the popularity of populists who ‘finally says what the elite does not dare to say’. Both Germany and Japan became aggressors when they were excluded (for very different reasons) by the rest of the world. In a different context, politics in Iran became more extreme after exclusion as well. In Europe, we see a trend that populist and nationalist parties become increasingly popular since the refugee crisis and IS attacks in European countries, and could wonder if the popularity of the Trump would still be the same without such global challenges.

Frustrated people
And here lies the problem: when people vote for a person who expresses their frustration and not for idea’s or solutions, the idea of democracy is a hollow promise. The two referenda I referred to earlier in the UK and the Netherlands were both about European integration. This is a complex process in which there is no black and white, but a million shades of grey. The complexity of the process lies in the field of economical, geopolitical and strategic solutions for international problems. When these complexities are narrowed down to ‘yes’ or ‘no’, there will never be any real debate on the way Europe could progress or change into something more suitable.

Next to that, the idea of democracy is that voters make an ‘informed choice’ (to use an economic term) about the vote they cast. In other words: it would be helpful if voters would know what they are talking about to make democracy work. This sounds more hautain than it is intended: in a democracy we do not expect voters to be experts in economics or other academic disciplines to be able to vote on things as the European Union, or on how to make America greater than it already is. However, it would be helpful if people would be willing to look further than the package of a political leader, and try to grasp what she/he proposes to solve certain problems. For instance, by reading a party programme, or read about relevant facts and background information of the subject people vote on.

To illustrate, one of the initiators of the Referendum in the Netherlands, who was against a treaty between the EU and Ukraine, was proud to announce that he did not read what’s in that treaty. He was not interested in its content, and wanted to voice a more general disapproval against the idea of the European Union. He simply took the democratic tool of a referendum as a mean to do so. While he was supported by many (the Dutch people voted ‘against’), this has very little to do with democracy.

How to make democracy great again
Is democracy than a bad thing? Not necessarily. We could compare democratic processes with a knife: you can use a knife counterproductive by killing someone, or in a more fruitful manner, by cutting a slice of bread for breakfast. The concept of democracy is not per se bad, but how people use it might be. And frankly, the alternative is probably worse: Plato preferred an aristocracy, in which the best suited, most talented would rule. But that is only a hypothetical state for it would be very hard to determine who is most suited. His other alternatives are societies in which the army, or the rich men would rule. No, let’s stick to democracy please!

However, we need two things to make democracy work: a constitution to help people protect themselves against bad governance, and good citizenship.

To start with the first: most constitutions in relatively well functioning democracies have an emergency break when the democratic process would be abused in a counterproductive way. For instance, minorities are protected against the majority, there are fundamental human rights, an independent Judiciary and the constitution cannot be changed over night. Whomever will become the next president of the U.S., she or he will not easily be able to dismiss the fundamental principles of the American Constitution and its Amendments, and the protection guaranteed by years and years of verdicts of American Judges.

Furthermore, we need people to be aware of the fact that democracy is not the same as the right to scream around their frustration in the most rude wordings. Democracy is the right to make an informed choice about the future governance of your country. This means that the electorate, for having the right to vote, has the duty to make sure they know what they vote about. This is not rocket science reserved for an educated elite, but rather an attitude. It is simply the desire of being critical, reflective, solution oriented, and peaceful.
This blog relates to the following chapters of the author:
Wernaart, B. (2015). Ethiek en economie, een grensoverschrijdende inleiding. Groningen: Noordhoff uitgevers. H. 11 and 12.
Wernaart, B. (2017). International business law, a global introduction. Groningen: Noordhoff uitgevers. H. 3.